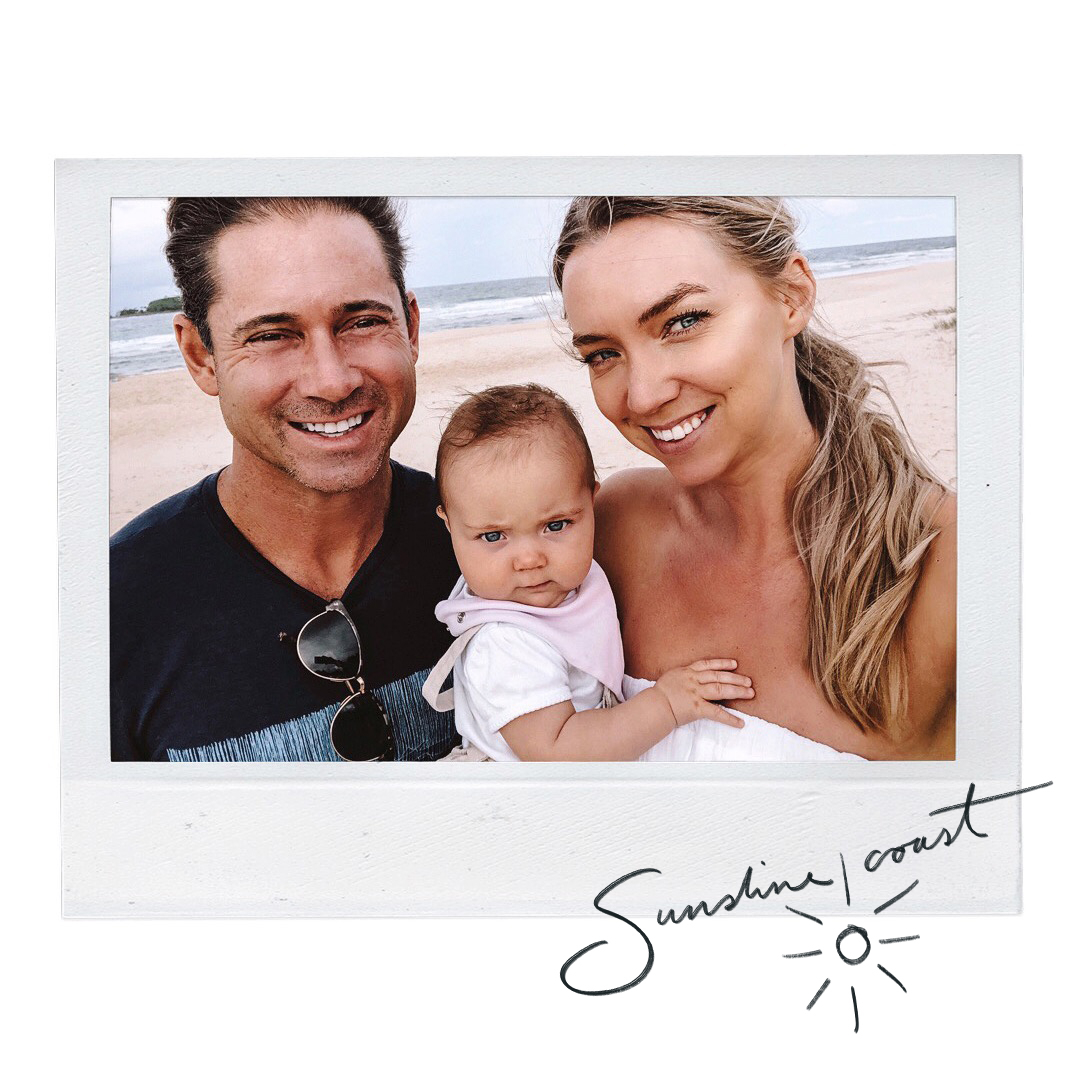 I can’t believe Rose is turning 6 months this month. In the first few weeks of her life I was thinking to myself how far off that point she was, and what a miracle it would be when this little person began sitting up by herself, eating sold food and behaving somewhat like a human. Yet here we are now.

We’ve had a fair bit on this past month, with Easter in the mix and also a full house hold still. Rosie has generally been pretty easy going this month, but we’ve most definitely had our off days when she’s been teething really badly, and her naps and day sleeps have also been a little all over the place. She’s cracked her two bottom teeth this month, and boy, are they sharp. As we’re still breastfeeding, this terrified me, but she’s super gentle when feeding, which I’m grateful for. The handful of times she has use her teeth, I think my reaction scared her enough to put her off doing it again…

We went to Queensland to spend some time with family over Easter, and as per last time I was a bit nervous about the flight. We had hubby with us on the way there, but planned to go back a few days early, so we’d be on our own on the way back. I figured our last dream run was beginners luck, but it turned out not to be at all. Even the hostesses commented on how chill she was. My biggest tip here is to feed on the way up and down, and bring entertainment. I stupidly didn’t bring anything on the way up, so a newspaper ended up being our saviour. Whatever works, right?

Rosie copped her first proper cold over the Easter break, and it was while we were away as well, which made the whole thing ten times worse. Seeing your bub sick is THE worst thing in the world, I think. We ended up at the doctors eventually, whom prescribed antibiotics which we really didn’t want to give her. As she seemed to be coping OK (was generally still very smile-y and chirpy), we ended up not having to take them, but we doubled down on all home remedies while we were away and when we were back home. This included a humidifier in her room, elevating the bassinet, rubbing baby Vick’s on her chest, back and soles of her feet (and popping socks on), and getting her to feed more often than usual. As I was sick as well (it’s always the way, isn’t it?), that week was definitely a bit of a struggle for all of us.

Being sick and getting your first teeth at the same time was a bit of a double whammy, and she was pretty clingy for a few weeks this month. I’m not going to lie, it’s been exhausting to and from. Sometimes there was just no pleasing her, and I couldn’t leave her sight without her having a good old cry. At this stage I’ve read that babies start to grasp the distance between them and others / things, and they can sometimes get a little clingy as they realise you can just get up and walk away from them, and they can’t follow. I absolutely saw a bit of this at this stage, but then I just did my best to reassure her that she was fine, and I was always close by.

Another big milestone for this month : solids! Oh boy, what a mess. But it’s also a heap of fun. To date we’ve tried things like banana, sweet potato, carrot, pumpkin, oats, apple, pear, corn and peas. Fruit is a favourite, and when I make veggie blends for her I tend to throw in a bit of fruit to sweeten the deal. She’s really into food, which is fun.

I’ll start by saying that you quickly get used to having more sleep. The week when Rose was sick and I was getting up every 2-3 hours, I was pretty shattered. Then I remembered that this was what it was like in the beginning, and I found myself questioning why it was such a struggle now. We are lucky to have a great little sleeper, so when things are out of whack, you can really feel it. Hubby relieved me as much as he could, I got a massage in and a nap whenever possible. It all helps.

As we transitioned out out of the Snoo this month, and getting out of routine a bit with her being sick, I took the Taking Cara Babies course to help refresh and reset our routine — which has made the world of difference. I cannot recommend this course enough, and it’s such a relief to have a baby that can put herself to sleep when she needs to. I think because of the foundation that we already had, it only took us a couple of nights to get there, but it was a great way to reset, and get back into routine. She’s now doing 11-12 hour blocks at night, and napping about 3 hours a day broken into 2-3 parts.

Overall I feel like we’ve both come to a point where we are OK with longer times apart. By this I mean me getting 1-2 hours to myself, getting a massage, going shopping or whatever, when someone else looks after her, and I know she’s OK. It’s been a huge shift for me, not being needed constantly, and not being able to leave knowing that she will be settled and happy whilst I’m gone.

I think that this point, if your bub hasn’t been sick, most babies hit some sort of sleep regression. I think we hit this, got sick and transitioned out of the Snoo, all at the same time which was really hard work. To all you sleep-deprived parents out there; I can tell you this: it does get better, and persistence is key.

My training has gone out the window, 110%. I obviously stopped training when I got sick, and the sleep-deprivation probably didn’t help either, and now I feel like I have lost all motivation and dedication towards my training. That, AND my gym membership has expired. I spent a few days beating myself up about it, but now I’ve just accepted the fact that I will get back to it when I’m ready. Honestly, what’s the rush? In the meantime I’m making sure I get a couple of longer walks in with bub, and with the new Baby Jogger running pram, even a run or two a week.